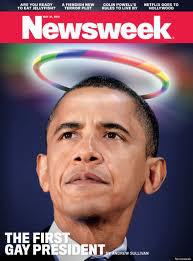 With President Obama now endorsing (at least for this week) the idea of gay marriage, it’s time to drive a stake through the heart of this beast.  First of all, to understand the inherent social danger in homosexuality, we must only take the beneficial act of homosexuality to its natural conclusion and see how society fairs.  To put it simply, if everyone were homosexual, humanity would cease to exist is in about eighty years, which means that any society that promotes homosexuality is intent upon its own destruction.  But aside from such stark and obvious logic, there is simply no way that homosexual marriage can truly be considered marriage from a Biblical point of view.

God created humanity in His image (Genesis 1:26,27), and when He created the humanity that would bear His image, He created us male and female.  The male is different than the female, but each still bears God’s image, which means that the male represents a different facet of God’s image than does the female, and vice versa.

Additionally, this idea of marriage is meant to be a life-long covenant between a man and a woman (Malachi 2:14), for the primary beneficiaries of the wedding of these differing male and female natures will be the children of the marriage – when the children look at their married parents they are meant to see as undiluted an image of God as is possible.  Such an arrangement (and the view of the image of God it affords) best prepares the young Image Bearers for the rigors of appropriate adult life (Malachi 2:15).  We tamper with such a model to our profound peril.

Gay (homosexual) marriage is an oxymoron of the most ridiculous magnitude, for you cannot wed man and man together, or woman and woman together.  If you try to do so, you will only subvert the image of God in humanity, and humanity will quickly wax worse and worse in its perversions (Romans 1:18-32).  God did not create Adam and Steve, or Madam and Eve, and we need to come to terms with the truth of this.  It’s understandable that Hell and its mouthpieces think gay marriage a wonderful idea, but we must oppose such ideology with all of the strength we can muster.

A nation built upon Biblical principles is forever held accountable to those principles (Deuteronomy 28).  Come on Church, where are you?