At long last, I finally have the privilege of introducing the book I’ve been promising.  The work of many years, UNGOD: Unmasking the Dark Image of Hell, has finally made it to print, and so please let me take a few minutes of your time to describe what it’s all about.  Rather than launch into a typical book description, though, I think it would be helpful to simply answer the most frequently asked questions about it that I find myself answering these days.  So here goes:

Q: Where did you come up with that title?

A: The subtitle (Unmasking the Dark Image of Hell) really defines the underlying current of the book, which is that of exposing the reality of Evil and what it’s trying to do to our world.  Regarding the main title (UNGOD), Scripture teaches that behind the idea of Evil there is an ancient and malevolent enemy of God and humanity.  Since this evil is best described as the absence of good, so also is our enemy best described as the absence of God, or the “un” of God.  I therefore chose to name him the ungod in order to describe him and his mission, and UNGOD just seemed like an appropriately epic title for the book after that.

Q: What’s up with the spooky image on the cover?

Q: How long did it take you to write UNGOD?

A: From the first thought to having boxes of books arrive in my office was nearly eight years.  It took six years to physically write UNGOD, about eighteen months to refine it, and then roughly four months for the publishing process with Dog Ear Publishing.

A: Here’s the thought that started it all: In the beginning God created man in His image.  Ever since then, the Enemy has been trying to remake us in his own.  By reasoning through the Scriptures, UNGOD follows and defines the image of God in humanity, and in so doing shows us how the ungod is attempting to corrupt that image, shows us how we can fight back against him, and most importantly shows us how we can defeat him.

Q: Why should the image of God be important to us?

A: In Genesis 1:26, the first mention of humanity was done in conjunction with the first mention of the image of God, making the image of God the fundamental fact of human existence.  If we don’t understand what this image was meant to be in us – and what it still can and should be in us – the ungod will corrupt and pollute it into extinction, as has already happened once in human history (Genesis 6:5). 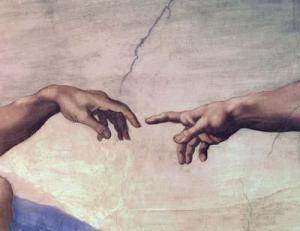 Q: What is the image of God?

A: It’s a daunting task to reduce the concept of the image of God to a sound bite, but if my back were against the wall on this question,  I’d define it as whatever is good, right, noble, true, admirable, excellent and praiseworthy (Philippians 4:8).

Q: How does the image of God work?

A: It works much like photographic images work.  For instance, if someone were to study my collection of photographs of my first great dog, Sasha (who died many years ago), that person would come away with the ability to clearly describe her to others.  In the same way, every remarkable aspect of the design and construction of the human being reveals something wonderful about God.  In effect, we were designed as natural advertisements for His existence and what He is like.

Q: Why are all of the main chapters called “battlefields?”

A: Because we (and our planet) are ground zero in the struggle between Good and Evil.  As human beings, we aren’t meant to be pawns in this war, but are rather meant to be participants in it, and will one day give an accounting for our efforts to our Commanding Officer, as would Paul (2 Timothy 4:7,8).  The chapters are therefore called “battlefields” to help us recognize the reality of the war raging all around us.

Q: Why should a Christian read UNGOD?

A: Not only are we Image Bearers by virtue of our humanity, but we are redeemed Image Bearers by virtue of God’s grace, and Jesus our Redeemer is the perfect example of the image of God (Colossians 2:9; Hebrews 1:3).  This noble theme should therefore drive the very beating of our hearts, and I humbly submit that UNGOD makes this theme clearer and more relevant than anything else out there.

Q: Why should a non-Christian read UNGOD?

A: Although they may not know it, understand it or believe it, every human being still bears the image of God.  This is why no matter where you travel in the world, you will find those whose hearts harbor noble ideas and who yearn for things like freedom, dignity, loyalty, love, compassion and friendship.  Though they may not know its source, all of humanity alike possesses this Image and its noble yearnings, and so all have an equal stake in seeing that it is not made extinct upon Earth.  UNGOD is written is such a way that these issues are made clear to all.

A: Yes, quite serious.  It’s certainly not “light” reading, and because UNGOD is thought-provoking, challenging and exposes those seductive tentacles of Darkness we all tend to hold dear, I find it best to take it in small doses, much like we do with devotional reading.  That’s why I think the most important page is the Epilogue: A Note on Grace, which ends the book, and I recommend turning there often during the stern trench warfare of the many Battlefields that precede it.  It is truly sobering to come face-to-face with the degree of Darkness entrenched upon Earth, but it must be done.

A: Because UNGOD is self-published, it isn’t yet available in bookstores.  If you’re fortunate enough to be in or near God’s country (Fallbrook, California), you can stop by Calvary Chapel Fallbrook for some copies.  If not, UNGOD is currently available online in hardcover, paperback and e-versions (Nook, Kindle, etc.) at Amazon and Barnes and Noble, and may also be purchased directly from Dog Ear Publishing in either hardcover or paperback.  For distributors, please contact Dog Ear Publishing directly for wholesale pricing.  All of this information may be found at www.ungodthebook.com.

Q: What will you do with the money you make from UNGOD?

A: The financial proceeds from UNGOD will go to charity.  I’ve been privileged enough in life to serve as both a pastor and as a member of the U.S. armed forces, and so we’ve created a charity (Old Adobe Publishing, Inc.) that will receive the funds stemming from the sale and representation of UNGOD and direct those funds to military and Christian charities and causes.  For a list of those charities under consideration, please click the OUR CHARITY button on our website (www.ungodthebook.com).

Finally, I’d like to extend a note of much-deserved thanks.  If wealth were measured in the loyalty of friends and family, I must be the richest man on Earth, and nowhere has this been exhibited more than in the long process of bringing UNGOD to the world, and that of preparing me to represent it.  In the spirit of true and honorable giving, all of you have given humbly and in secret, and so I cannot embarrass you with public acknowledgement.  But how much you teach me of Christ!  Sincerely I thank you.  Having said that, there are two I simply must acknowledge: my wife Amparo, whose encouragement is as endless as her love is deep, and my blessed Savior, whose grace is the source for anything of worth or merit in me, and always shall be.