With all due respect to the fantastic American motto of e pluribus unum (out of many, one), we must now move into the Divine lessons about human government taught us through the incident surrounding the

Tower of Babel, which may be found in Genesis 10-11.  As we do, we see that God’s motto for human government is more akin to ex uno plura (which my on-line translator assures me means out of one, many), for a single human government is anathema to the idea of good government.

Sadly, it did not take humanity long to pollute the very idea of human government dictated upon it by Heaven.  The thinking seems to have been if a little government is good, then a lot of government must certainly be better, and so after a little more than a century past the Flood, humanity found itself under the boot heels of a unified, one-world government run by a God-despising rebel named Nimrod, who held sway over virtually all of humanity from his empire’s capital of Babel.

So onerous was this in the eyes of Heaven that God had to drastically intervene in human affairs for the second time in less than two hundred years.  We must remember that God had promised to never again destroy humanity as He just had (Genesis 9:11), and implicit in that promise was the understanding that Heaven would never allow the global depravity of humanity to sink to the levels it had prior to the Flood.  To this end God had instituted human government through the requirement of capital punishment for murderers as the means by which this depravity might be stayed.

We do well to remember that every ability given to government represents a freedom lost to the governed, and is why I prefer to think of human government as human limit-ment, for that is essentially what it is and what it does.  Government should therefore always be kept as small as possible in order to carry out the minimal functions defined for it by its Author in the pages of Scripture, for God would not have His image of freedom in us limited any more than is necessary in order to maintain decency upon Earth.  And so to the issues at hand.

What Nimrod and his empire so quickly accomplished was the idea of human government on steroids, resulting in the scourge of totalitarianism, wherein human government garners control over all aspects of life, leaving the governed as slaves and wards of the state, bereft of freedom and human dignity.  When this dignity is lost, the depths of human degradation and depravity will soon follow, for there is nothing to stop the downward spiral into Hellish existence, as the idea of human government has failed in its reason for being, which is to protect and honor the image of God in humanity.

To rectify this dire set of circumstances at Babel, God confused the single language of humanity into several, and the Table of Nations in Genesis 10 records no fewer than seventy family groups with distinct languages spreading quickly across the globe.  Mission accomplished, and through the confusion of languages at Babel, 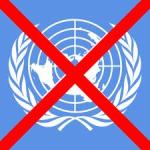 God has emphatically taught humanity that many, separate, independent and localized governments are better than a single government, and that He is likewise the avowed enemy of global governance.  One-world governance is therefore Hell’s idea of perfect government and must never be considered or allowed by us, and we must view with increasing alarm the current movement toward continental or hemispheric government, for the end-game of such thinking is eventually the global government of Nimrod’s Babel.

Simply put, having many separate and sovereign governments is the only way to have a chance of ensuring that human freedom and nobility survive upon Earth.  And while it is true that there will be winners and losers in such an arrangement (as some nations and peoples will enjoy more or less of freedom and nobility than others), it is equally true that a people’s potential blessings are completely in their own hands (Deuteronomy 28).  But under a single human government, all will lose equally, and all will lose all.