for some time been putting off writing this article, but I find that I can be silent on this issue no longer.  What  is written here is meant mostly to carry the sting of rebuke to those of us who deem ourselves to be Christians, but yet who have allowed political and cultural life in America to become the cesspool that it is.  Secondarily, what I write is also meant to bring the sting of rebuke to our President and his Administration in their headlong pursuit of evil ideologies.

When someone is routinely wrong on every issue, there are only two possible explanations: either the person is phenomenally unintelligent or the person firmly believes in things contrary to reality.  Since I believe President Obama to be an intelligent man, I’m left to conclude that his siding with anti-Biblical issues at every turn makes him a person who believes things contrary to reality, and who is therefore dangerous to all things good and decent.  Let’s look at just a few examples and their logical consequences.

Abortion.  Humanity was created in the image of God (Genesis 1:26,27), making human life both sacred and something that may be taken only by His permission.  Since human life begins in the womb (Luke 1:39-44), this makes abortion murder, and (sadly) President

Obama has shown himself to be an unswerving champion of this idea.  Logic dictates that any nation who can so callously deal with their children on the one hand will not know how to love and raise them on the other.  Such a nation will not last long, nor does it deserve to.

Homosexual Marriage.  In the Scriptures, marriage is an institution designed only to be shared between a man and a woman (Genesis 2:24; Malachi 2:14), whereas homosexuality is considered deviant and sinful (Leviticus 18:22; Romans 1:26,27).  President Obama, on the other hand, desires to sully the institution of marriage with homosexuality.  Since homosexuals don’t reproduce, it logically follows that if everyone in a nation were homosexual, that nation would disappear within a generation.  This means that only a nation bent upon its own demise pursues such an idea as beneficial.

Redistribution of Wealth.  The Eighth Commandment (Exodus 20:15) makes it very clear that a fundamental purpose of human government is to safeguard personal property, which means that no one is entitled to anyone else’s goods or wealth.  However, President Obama has never met an entitlement program that he didn’t like.  The logical danger of such thinking is that once a significant portion of a nation’s people believe they’re entitled to the wealth and goods of others, all social cohesion will be lost.  Such

a nation will destroy itself in short order.

Charity.  The scourge of wealth redistribution is typically justified through the need for charity, but the clear expectation of Scripture is that charity belongs only in the hands of freely-giving individuals, families, communities or houses of worship (James 1:27).  No cause is noble enough to justify governmental theft, but our President cannot think of a single situation that cannot be solved by it.  Any people who have to rely upon their government to extend charity to the needy, however, have already lost their goodness and dignity, and will not last long upon Earth.

Multiculturalism.  Biblical Israel had three things that set her apart from all other nations: a separate language, a separate law and

a separate culture (the worship of Jehovah).  She could only remain a separate and sovereign nation if she were unashamedly mono-cultural (Exodus 20:3), because different deities represent different core values.  The clear truth of Scriptural evidence is that every experiment of Israel with multiculturalism resulted in weakening her, in destroying her will to be exceptional and in her loss of sovereignty, yet President Obama is openly trying to destroy the Judeo-Christian core at the heart of America.  Since multiculturalism results in a weakness and division that invites conquest, it is suicide for any nation.

Sovereignty.  It was God who instituted the idea of many separate and sovereign nations (Genesis 11:8,9) and who

gave Israel clearly-defined borders (Numbers 34:1-12).  Behind these borders were to exist the language, law and culture that made Israel distinct from all other nations, and she was to guard those borders and her sovereignty jealously.  Because of this, only converts to her language, law and culture (Ruth 1:16,17) were to be allowed inside her borders, but President Obama champions the idea of a border open to any and all comers.  A nation with no exterior has no soul, and a nation with no soul has already lost its way.

Theocracy.  All good law is an extension of God’s nature (Exodus 20:2), and since humanity is created in God’s image, humanity simply cannot be appropriately governed apart from good law.  This means that all good government must at its core contain a theocracy based upon the Jehovah of Scripture.  When President Obama pursues his agenda of the separation of Church and State, he is trying to remove God from all that America is.  Such a nation would be at odds with the Supreme Being of the universe (who defines reality), and that’s not a good place to be.

Freedom.  The human soul longs for freedom because we’re created in God’s image, and He is completely free.  However, because of the existence of the sinful nature of humanity, we cannot be allowed complete freedom (see Genesis 6:5), and so God instituted the idea of human government in order to limit the worst expressions of the sinful nature (Genesis 9:6).  Since government exists in order to limit human freedom, it necessarily follows that every ability given to government enshrines the loss of a human freedom.  A wise nation will therefore desire its government to be as small and unobtrusive as possible.  President Obama’s answer, however, for every single situation encountered is more government.  This is the same thing as insisting upon less freedom.  A people with such a government quickly become enslaved by it.

Armed Citizenry.  The Bible paints a remarkably clear picture of a fallen world populated by fallen people and fallen governments.  These fallen governments always tends toward tyranny, and one way for a government to perpetuate its tyranny is to disarm its people so that they may be easily controlled (1 Samuel 13:19-22).  For this reason (and to protect oneself from the actions of evildoers) Jesus recommended that people be armed (Luke 22:35-38), yet our President and his Administration are steadily 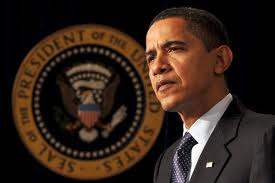 working to disarm the people they are sworn to protect.  A nation of unarmed sheep will quickly fall prey to wolves.

The road down which our President is leading this nation is dark and dire and shows every indication of being purposefully so, and it is the duty of every Christian to oppose this direction and agenda.  Part of being salt and light (Matthew 5:13-16) is opposing Darkness at every turn, and this Administration has clearly shown itself to be a pawn of Darkness and its Master.  We’re called to pray for our leaders (1 Timothy 2:1-4), but we’re never called to support or follow them down the broad road that leads to destruction (Matthew 7:13,14).

Christians need to put an end to this madness.  It’s not just blood on our hands any longer – it’s wholesale Darkness.  Do not think that God holds us guiltless in this.